The Guardian Higher Education Network is delighted to reveal the shortlist for the Inspiring Leader 2018 award. 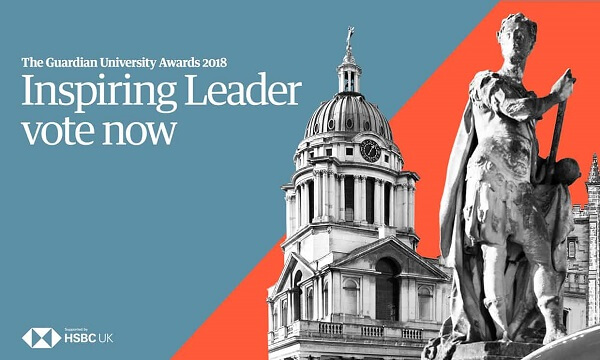 This week Dixon Walter had the pleasure of assisting the judging panel for the Guardian University Awards. This particular award recognises a leader who has brought out the best in the people they work with to achieve exceptional results.

They champion innovation and collaboration, deliver real change for their institution and the sector, and inspire the higher education community.

The five names below were selected by our expert judging panel and shortlisted by the Guardian, but the winner will be chosen by you, the readers.

The deadline for votes is Friday 6 April. The winner will be announced at the Guardian University Awards ceremony in London on 24 April.

What the judges said:
Many universities talk about widening participation but King’s stands out as an institution that has really worked to achieve it, with Anne-Marie at the forefront. She has a gift for a colourful quote and a good tweet, which also helps keep widening participation high up the higher education agenda.

What the judges said:
Although a newcomer to Birmingham, Alec has embraced the city, its goals and ambitions. He is recognised as an influential leader within the West Midlands. Alec is redefining the university’s strategy to have maximum impact, marking a significant change of perspective. He takes equality seriously – particularly gender equality – and has been striving to have a more even gender split in the university leadership teams.

Professor Craig Mahoney, vice-chancellor, University of the West of Scotland

Craig is an internationally recognised psychologist and academic. He has been principal and vice-chancellor at the University of the West of Scotland (UWS) since 2013. Previous roles include CEO at the Higher Education Academy (2010-2013) and deputy vice-chancellor at Northumbria University (2007-2010). Craig currently serves on the boards of Sportscotland, the Leadership Foundation for Higher Education, the Quality Assurance Agency, Glasgow City of Science, and is a trustee on the Carnegie Trust for Universities of Scotland.

What the judges said:
In the past few years, Craig has done a great job in advancing UWS. Previously languishing, it has really begun to rise up the rankings. He has demonstrated an unstinting commitment to the role and has been a passionate advocate for the university as well as for the economically challenged town of Paisley.

Mary Stuart grew up in apartheid South Africa and emigrated to the UK for political reasons. Like many migrants she initially had some challenges. Having become pregnant with twins, Mary and her partner were evicted from their rented flat, meaning her twins started life in a hostel for homeless families. Determined to make some sort of success of their lives, Mary studied for a degree with the Open University and after a career as a social scientist she went on to become vice-chancellor at the University of Lincoln. While at Lincoln she has emphasised staff and students coming together to make the university a single community.

What the judges said:
Mary has managed to turn around the university and has never lost sight of what the university is about, its mission and widening participation. A post-92 institution that gets a gold in the Tef should gain recognition – especially its leader.

Debra took up post as vice-chancellor at the University of Brighton in December 2015. In 2017 she was elected to chair the Universities UK student policy network and was subsequently returned in March 2018 to serve a further three years. In addition, she chairs the UCEA clinical academic staff advisory group (CASAG), is a member of the Coast to Capital LEP Board and is treasurer to the University Alliance. Debra joined the University of Brighton from Imperial College in London, where she held the position of vice-provost (education) between 2012 and 2015. As an openly LGBT senior leader in higher education, Debra is passionate about equality and diversity.

What the judges said:
Debra is an inspiring and inspirational leader whose focus on issues of equity, diversity and social justice underpin her approach to leading and managing.